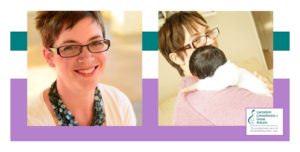 “I initially trained as a paediatric nurse, then later studied specialist community public health nursing and became a health visitor. I’ve worked in five major London children’s hospitals, covering everything from ambulatory care to neonatal intensive care. I always wanted to work with well children in the community, and although I enjoyed the adrenaline rush of high dependency and intensive care, I became frustrated when I didn’t know how my little patients’ stories ended!”

“I initially heard of IBCLCs when I was a student nurse, on a health visiting community placement in East London. There was an enigmatic and extremely knowledgeable IBCLC running a breastfeeding drop-in group: I was in awe of her! She remarked that I should consider becoming an IBCLC at some point, as there were very few IBCLCs from a paediatric nursing background. Since I love a challenge the seed was thus sown early on, when I was a fresh-faced 22-year old student nurse!

I took the exam in 2011 – qualifying as an IBCLC after about 9 years experience supporting mothers and babies. I have now been an IBCLC for almost 7 years, and a continuously breastfeeding mother for 8 years (and counting!).

During patient allocations in nursing handovers, I always sought out the breastfeeding babies to care for. I spent innumerable hours on long night shifts supporting mothers to express, or to care for their jaundiced babies. I’m sure in those early days I made many mistakes, but I kept learning, I kept asking questions and I kept getting better.

Later on, as a health visitor, I ran breastfeeding drop in groups and baby cafés on a weekly basis, and then continued supporting a Children’s Centre.

When I left health visiting and went to work in NICU for a few years, I became more involved with supporting sick and preterm babies to breastfeed. I had more than enough hours of practice, in a variety of contexts, and felt that although my experience was perhaps slightly skewed towards ‘unwell’ babies in the first part of my career, I made up for this with a large dose of healthy term babies later on!

Becoming an IBCLC was the best career decision I ever made.

I am 100% more confident in my knowledge and skills, and also feel more able to critically appraise literature and research studies in a way that I couldn’t before.

Prior to studying for and taking the exam, I was passionate about supporting mothers but there were holes in my knowledge; I had absorbed many skills, but I still came across cases where I was stumped, and so was everybody else. I wanted to get beyond being stumped, and be the person that others can call when they are stumped. Sometimes, I get asked about something weird or wonderful, and help mothers to find solutions to unusual problems. Most of the time, however, breastfeeding problems have a basic root cause. Unfortunately, when those basic problems go unresolved for many days or weeks, the problem becomes more complex and entrenched, and the expert knowledge I have gained from being an IBCLC, and maintaining my credential, is something I call upon.

Any paediatric nurse or midwife who has been frustrated with the breastfed babies who are re-admitted with nursing aversion, poor weight gain, jaundice or reflux will benefit hugely from achieving the IBCLC credential. Imagine being able to be a resource for the whole ward! What would it be like for those mothers who would have been told to top-up with unnecessarily high volumes of formula, if you could speak with reason, authority and confidence in their defence? In fact, I vehemently wish more paediatric nurses would undertake the qualification, since paediatrics is the one area where the Baby Friendly Initiative staff training has not been universally embedded, and some skilled, evidence based support is sorely needed.

Health visitors and infant feeding leads are also obvious candidates to become IBCLCs. With the amount of influence health visitors have over sustaining breastfeeding beyond the first few weeks, it is easy to see how IBCLCs, with their ability and expertise to help mothers overcome longer-term breastfeeding challenges, or to simply unpick normal infant development would be invaluable.

Any health professional in a breastfeeding leadership capacity should seriously consider training as an IBCLC. It will add greatly to your skill-set, knowledge base and personal sense of achievement! No it’s not easy to study for, but then – if it were easy, it wouldn’t be respected as the globally recognised standard of quality in breastfeeding.

These days, with my uniform long since hung up, I am mostly to be found teaching – something I have a real passion for. I teach healthcare professionals, maternity nurses, nannies and parents about breastfeeding, sleep and gentle parenting. I’m just finishing off the edits to my first book, and about to start a PhD examining how supporting parents with gentle sleep strategies may improve long term breastfeeding outcomes; I have an international private practice, and also do a considerable amount of voluntary work. The IBCLC credential has opened many doors and expanded what I initially set out to do within paediatrics; from a career perspective I now actually consider myself first and foremost an IBCLC and teacher, rather than a healthcare professional!

If you are interested in knowing more, please see our information on pathways to the credential, here.