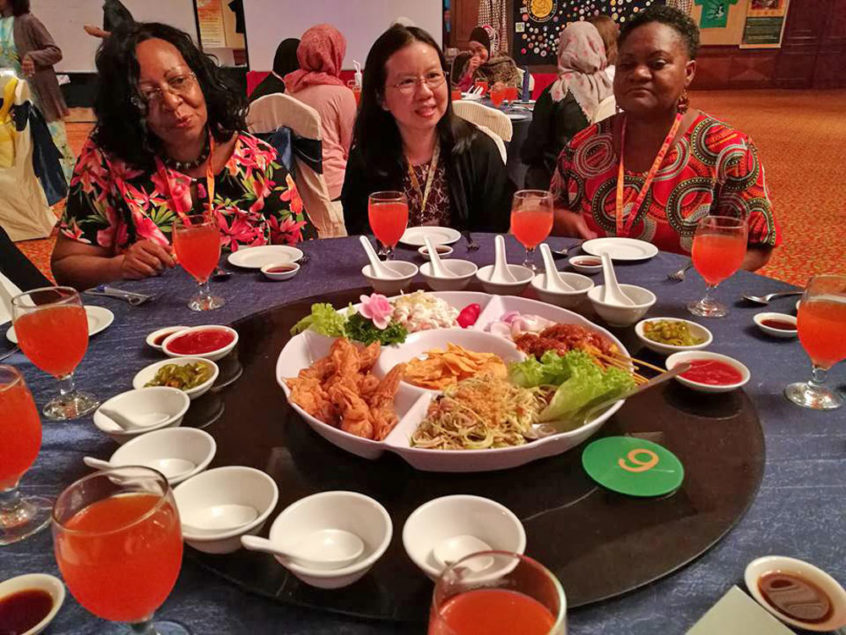 In October this year I had the very great privilege of returning to Penang, Malaysia, as an invited guest to the World Alliance for Breastfeeding Action’s 25th anniversary celebrations. As a Consultant to WABA on HIV and breastfeeding from 2005 to 2009, I had taken the 12-hour flight from Heathrow to Kuala Lumpur and then on to Penang no less than seven times, so this trip really felt like coming home. 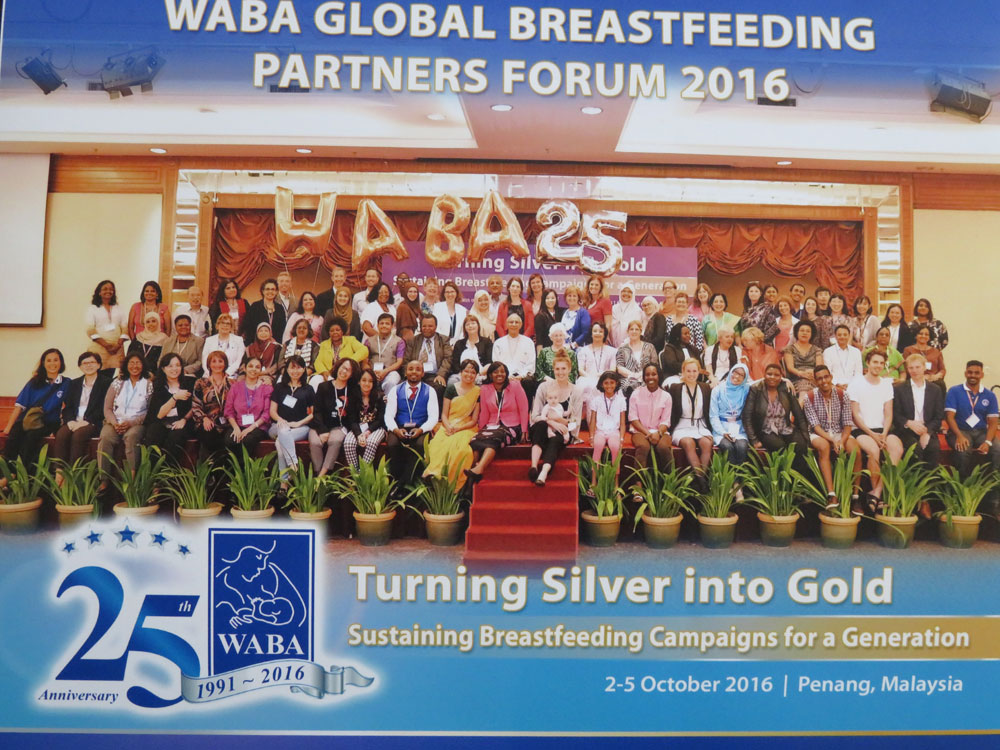 It was wonderful to catch up with the WABA Secretariat folks who worked in the office before and are still there – old dear friends like Sarah Amin, and Felix Savage, Anwar Fazal, Satnam, Devi and Sita, and many familiar faces from the Steering Committee. The babies of some of them were now charming 10 and 12 year olds. In other cases, where there had been changes, it was possible to put faces to the names of WABA secretariat members I’ve been writing to and collaborating with during the intervening years. Then there was the surprise discovery that old friends Julianna Lim Abdullah and Mun Tip Liew, now working in Kuala Lumpur, made the five-hour road journey to come and celebrate with us on the opening night.

To my joy, I was able to catch up with two old friends from Zimbabwe days – Rufaro Madzima, who had been our National Breastfeeding Co-ordinator, and Nomajoni Ntombela, a long-time breastfeeding advocate who had collaborated on several projects. And there were other old and new friends, Margaret Kyenkya from Uganda, now living in the US, Lakshmi Menon, who I caught up with over lunch on the first day, Prashant Gangal from Maharashtra, India, Pushpa Panadam from Paraguay, who helped me with rapporteur duties for one of the sessions, Gina and Lily who live in Malaysia and with whom I was able to enjoy the lavish Welcome and Farewell Dinners, long-time colleague and collaborator on HIV and infant feeding Regina da Silva from Brazil, Nand Wadwhani, who administers the hivbreastfeeding.org website, the current President and Executive Director of ILCA , Rhuksana Haider whose brilliant paper on exclusive breastfeeding I cite all the time… in fact breastfeeding people from every continent and too many to mention individually. 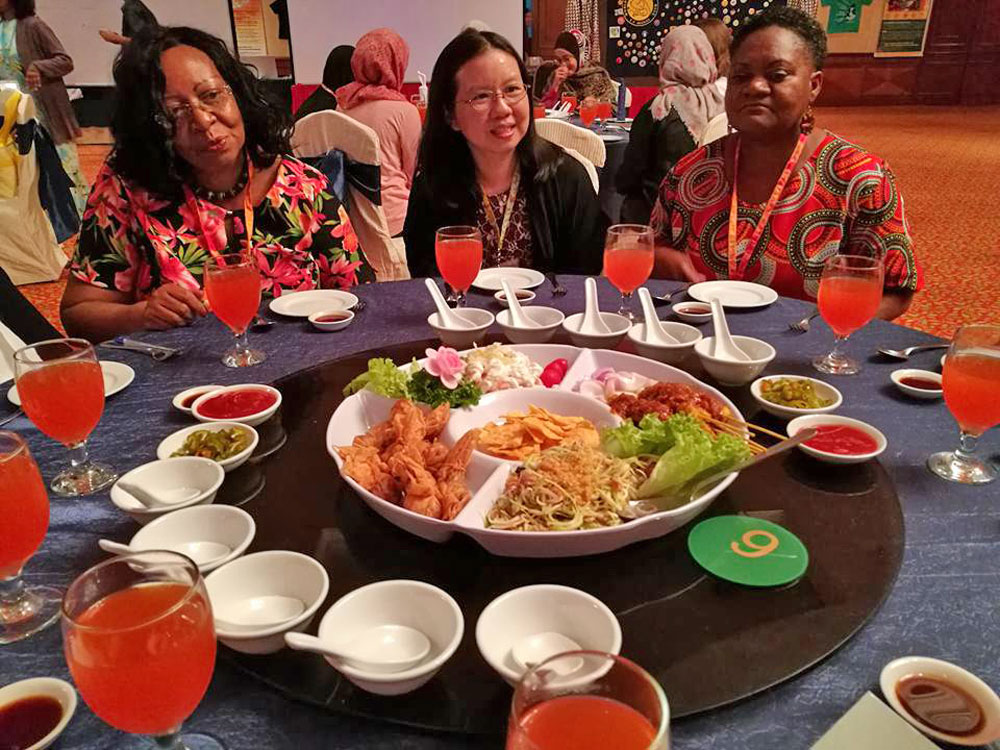 Marking WABA’s 25th anniversary, the theme of this year’s Global Partners’ Forum, which ran from 2 – 6 October, was “Turning Silver into Gold”. The goal of the conference was to celebrate key achievements and to bring new partners to the breastfeeding movement in order to move towards more innovative and impactful ways of working to achieve the overall goal and objectives of WABA. In particular there were two main technical issues,

One plenary session addressed evidence-based breastfeeding advocacy. Another was devoted to gender issues. Still another discussed the Baby-Friendly Hospital Initiative. The tissues came out in a moving session honouring some of WABA’s fallen heroes, such as Andrew Chetley, Michael Latham, Audrey Naylor and Miriam Labbok, all sadly missed. We were treated to a documentary showing Leah Margulies’ early work in the Seventies which led to the Nestle Boycott. Particularly enjoyable and useful was the last morning’s session where delegates were invited to attend a World Cafe session, linking organizations, people and ideas, swapping ideas for ways that we could collaborate, exchanging business cards, picking up pamphlets and informational material and many promises to keep in touch. There was much interest in my favourite topic, HIV and breastfeeding, and I made useful contacts for the future who might be able to take forward research on galactogogues, and the care of prem babies. Finally, on the last afternoon, a colleague and I were treated to a tour of the baby-friendly Neonatal Unit at the Penang General Hospital by a new friend Revathi who is clearly passionate about her work. 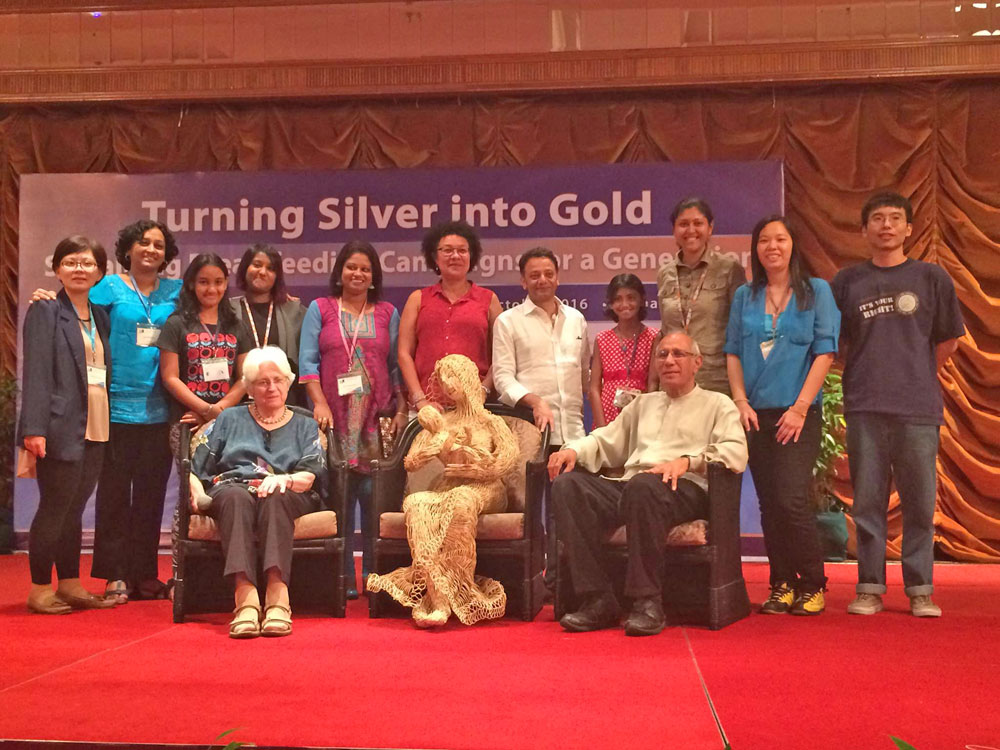 WABA Secretariat and the Executive Committee

Sadly, all good things must come to an end, and all too soon I was on the plane flying back to Heathrow. Sharing time and exchanging experience and ideas with such dedicated breastfeeding advocates was a tonic. The lavish hospitality and wonderful Malaysian food were second to none. My grateful thanks to WABA for this wonderful conference. I can now begin the new tasks I was set in Penang with renewed inspiration and enthusiasm.