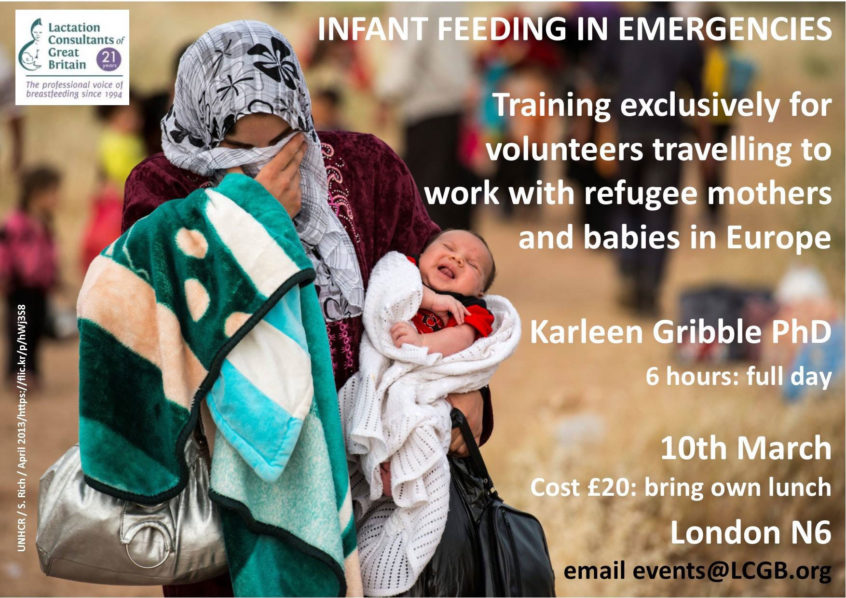 Infant Feeding in Emergencies: working with refugee families in Europe 2016

In emergencies, infants and children under the age of 2 are the most vulnerable. The current refugee crisis has displaced millions of people and brought tens of thousands of children and pregnant women to Europe (over 88K children in 2016 alone according to UNHCR figures). Even in Europe, whether they are in transit, or in a refugee camp, these children are incredibly vulnerable.

The response to the refugee crisis in Europe has proved different to previous emergencies, not only through the sheer numbers of people, but with the number of countries involved, the lack of a coordinated response and the involvement of large numbers of untrained volunteers. This has all contributed to especial risks with regard to infant feeding.

Dr Karleen Gribble PhD is an Adjunct Associate Professor at the School of Nursing and Midwifery of the University of West Sydney, Australia and an Australian Breastfeeding Association Community Educator and Breastfeeding Counsellor. She is also one of only two individual members of the Infant Feeding in Emergencies (IFE) Core Group.

The IFE Core Group is an international community of practice around infant and young child feeding in emergencies (IYCF-E) that functions as an interagency collaboration, with members including the likes of UNICEF, ENN (Emergency Nutrition Network), Save the Children, International Rescue Committee, etc. The IFE Core Group’s work to date has centred on development of policy guidance and capacity building tools, capturing and learning from what happens in emergency response with regard to infant and young child feeding and promoting policy and practice change in the context of preparedness and response.

In March, Karleen held workshops on Infant and Young Child Feeding in Emergencies (IYCF-E) in London, Manchester and Paris, aimed at volunteers working with refugee families in Europe.

For a full summary of the London workshop click here.