This article published in the British Medical Journal (BMJ) is being reported in the media as questioning whether exclusive breastfeeding for 6 months is appropriate for UK babies. This article is not based on new evidence but rather a re-analysis of older evidence, much of which is the same as that used as the basis for weaning recommendations from the World Health Organization (WHO) and the UK’s Departments of Health (DH).

WHO recommended the introduction of solid food at around 6 months alongside continued breastfeeding in 2001. This was based on evidence that the early introduction of solid food to babies increased the risk of infection and disease. In 2003, DH also began to recommend introducing solids at ‘around 6 months’, changing from its previous position of ‘at 4-6 months’.The authors of the BMJ article question this recommendation for UK babies. The basis of their arguments is that delaying introducing solid food may increase the risk of iron deficiency anaemia (IDA), coeliac disease and food allergies, and that introducing new tastes may increase acceptance of green leafy vegetables and so encourage healthy eating later in life.

The Department of Health Summary 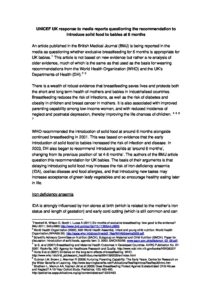 A DH spokesperson said “The Department of Health has a clear public health policy to encourage exclusive breastfeeding for around the first 6 months of an infant’s life as it is the best form of nutrition and uniquely provides substances that protect the infant from infections. ” The totality of the evidence supports a protective role of exclusively breastfeeding for the first 6 months of an infant’s life, and there is clear scientific evidence that breastfed infants are less likely to have gastrointestinal, respiratory, ear and urinary tract infections in the short-term, and particularly infections requiring hospitalisation, even in developed countries such as the UK.

The paper in this week’s BMJ is not a new research study nor is it a systematic review of all available evidence, but it merely calls for a review of the evidence on which the original recommendations on exclusive breastfeeding for about 6 months and introduction of solids at around 6 months were based. It highlights that further evidence has been published since these recommendations and does not draw any definitive conclusions.

The Department of Health recognises the emerging evidence in this area and the need to review current policy on infant feeding, to ensure that the recommendations are based on the best available evidence. The Department has already asked SACN to undertake a comprehensive review of the scientific evidence underpinning UK infant and young child feeding policy, and the SACN Subgroup on Maternal and Child Nutrition started discussions around the scope of this work back in September 2010.”